Although the provision of fire-fighting personnel on military establishments goes back many centuries, there appears to be very little known about the early days.  Below I have listed some notable dates and events that have led to the services we know today.  If anyone has information that will enhance this page, please email me at webmaster@rafanddfsa.co.uk. 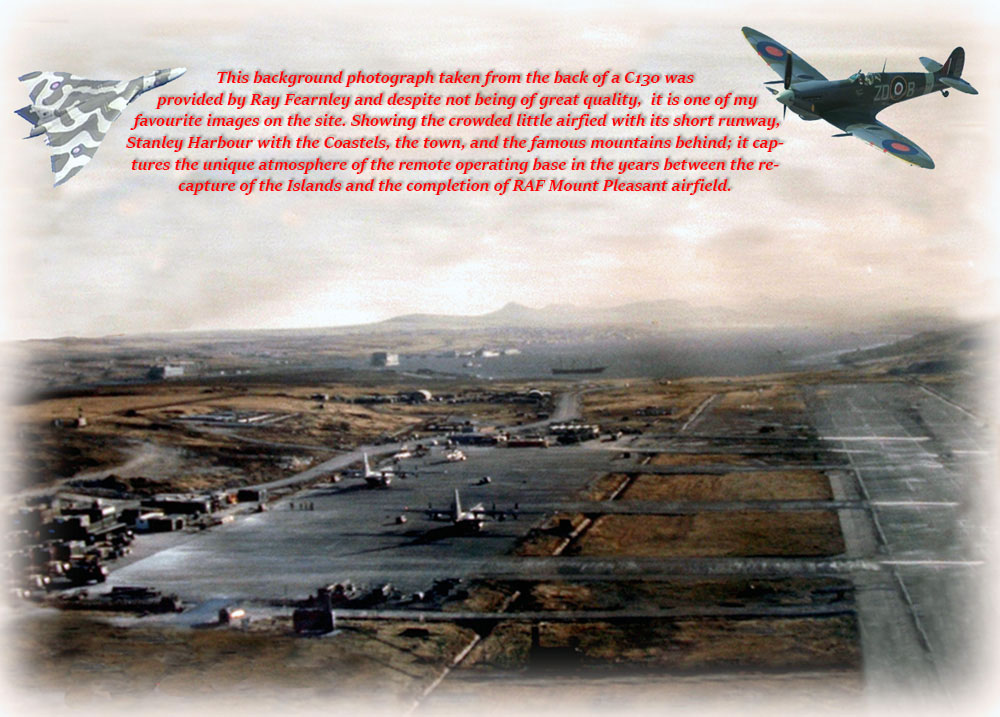 Since Tudor times when the large naval dockyards were first established there was always some sort of fire service/piquet probably manned by soldiers sailors and later Royal Marines.

Army Fire Service formed at Aldershot from the Pioneer Corps.

The Metropolitan Police (London) took over the guarding of the dockyards, and in addition they formed a fire brigade with horse drawn steam driven fire pumps / engines.

May 1912 saw the formation of the Royal Flying Corps and even in those early days it was necessary to provide some protection for the aircrews. At that time the only military fire service was the Army Fire Service, manned by Army Service Engineers and they were to provide fire cover for the RFC. The use of the Army personnel ceased in 1916 and the RFC took the fire fighting operations into their own hands. The necessary personnel were taken from many different trades, with fire fighting as their secondary task.

To combat the threat of fire, the landing stations of all the RFC’s Home Defence units were equipped with 30/40 gallon chemical foam fire extinguishers.  These were manhandled to the incidents when required.  Vehicles were established at the Store Depots of the RFC, unfortunately these were only fitted with hand held fire extinguishers.  So some advances were made albeit slight, with RFC taking some measures to offset the risks to life from fire.  Incidentally they still used the Army Fire Service Manual as the reference for firefighting.

The RAF was officially formed on the 1st April 1918 and during its formative years the loss of aircraft and equipment due to fires caused a great deal of concern which eventually led to the provision of a fire vehicle at every permanent RAF Station. The training of personnel to operate them started in 1922 at RAF Cranwell where a small unit was established to train a trade known as Aircraft Handler / Fire fighter. The London Fire Brigade, who provided the instructors and devised the training methods and schedules, controlled the Unit.

The year 1918 was to prove very costly for the RAF with the loss of many aircraft in storage.  At this time an airframe and an engine was priced at around £1000.  Bearing that in mind, the monetary loss from fires at Shotwick and Ternhill totalling £57,000 can be considered expensive.  Other units also suffered equipment loss due to fire; Wyton £23,239, Upavon £9,109 and Drayton Manor £16,128.  In light of these losses the Air Ministry felt compelled to order a number of fire-fighting vehicles with pumping facilities and with these measures against fire, it was hoped that the financial loss would start to decline.

On 21 May 1919 a fire at Ligescourt resulted in the loss of a Handley Page aircraft in (0/400 D8314), and the hangar in which it was accommodated.  This fire again prompted the Air Ministry to take further action as the results of the Court of Inquiry emerged.  Several deficiencies had come to light, including the fact that personnel were poorly trained in fire-fighting, and lacked effective fire-fighting equipment with which to do the job.  It was therefore decreed that every permanent station had to be equipped with a fire vehicle complete with its own housing, so vehicles were adapted for that role.

In 1921 the RAF MT Repair Depot at Shrewsbury began a modification programme which resulted in Crossley 6 X 6 tenders being fitted with crash/rescue equipment including a 30 gallon chemical foam extinguisher and hand-held "Fire Snow" extinguishers.  The programme was completed in 1922.

the Special Constable Act came into force, which permitted a new police service to be created formed by retired Royal Marines.  This new Service adopted the title of The Royal Marine Police and was made up of ex Royal Marines.  They operated under the Military Discipline Code and had to be sworn in and attested as Royal Marines once again. Their cap badge was silver in colour not gold as worn by the Marines.  They wore a police uniform and a peaked cap; presumably brigade personnel fought fires in this rig because no other Personal Protective Equipment was available at this time.  A prerequisite to promotion at this time was a written examination in Military Law and this included the Royal Marine Police Fire Brigade personnel.

In 1930 the RAF ordered more Crossley and Morris B1 chassis for conversion to fire tenders.  During this decade Crossley IGL 6 X 4 vehicles also went into service with the RAF along with many other vehicles including the Fordson Foam and CO2 tender.

First Civilian Fire Officers recruited into Air Ministry. "Regulars" had manned the RAF Fire Vehicles until 1939, this being a term for those who had volunteered to serve in the Armed Forces of their own choice. The threat of war in 1939 resulted in June of the Royal Assent of the Military Service (Conscription) Bill, which compelled every male of 20 years of age in the United Kingdom to register and serve in the Armed Services. With the uncertainty of which Service they would be sent to, many of that age volunteered to serve for "the duration of the war" in the RAF and some of them, together with those conscripted, were to be Fire-fighters.

In July 1940, after 18 years at Cranwell, the Fire Training Unit moved to RAF Weeton in Lancashire for 3 years, where RAF Personnel provided tuition at the Unit under the tuition of WO Pascoe.

On the move to RAF Sutton-on-Hull in 1943, the Fire Training Unit became the RAF School of Fire Fighting commanded by Sqn Leader Brooker MBE. It was there that the Fire Service was to see immense changes in its structure and organisation some of that was necessary with the vast advancement of military aviation.

On 31st December 1943 it is thought that the RAF Fire Service came into being with the promulgation by Air Ministry Order of the Trade of Firefighter (later changed to Fireman), Trade Group 9. To command this new Trade, Fire and Anti-Gas Officers were appointed and the school was renamed for the remaining of the war to the RAF School of Firefighting and Anti-Gas.

At the same time the No. 2 RAF School of Firefighting was formed at RAF Ismalia in Egypt, this closed at the end of WW2. Little is known about the training that RAF Firemen underwent during WW2, but it was of considerable importance. Throughout those wartime years  - they continued to provide a service to save life and fight fire involving numerous crashed aircraft.

After the war conscription, then known as National Service, was maintained until 1967, and young men of 18 years had to serve for 2 years. (For a short time there was a reduction to 18 Months.)

The uncertainty of their "doom" continued and many pre-empted the feared day by volunteering for service in the RAF at the age of 17½.  Some 22.600 were attested into the "Cream" between February 1946 and March 1947 which also included ex-services men who had already served their Country in other arms, and fancied a spell in RAF Blue.

A Unit Crest was approved by Queen Elizabeth 2, and presented to the School on Wednesday 22nd December that same year. The Crest depicted a gauntlet holding a flaming sword and Latin Motto – ‘E FLAMMIS ATQUE RUINIS SALUS’ (Salvation from Flame and Ruin’ with slight variations applied over the years).

In the post war years, some 5,000 Regulars and National Service Conscripts were trained as Firemen at the RAF School of Firefighting & Rescue based at RAF Sutton on Hull.

On 7 October 1959 Sutton-on-Hull was closed and Fire-fighter training was moved to the Fire & Rescue Training School (FRTS) located within the RAF Regiment Depot at RAF Catterick. The trade was then classified as RAF Regiment Fireman, Trade Group 22.

The Army Fire Service  was civilianised under  the RAOC.

The last National Serviceman demobbed from the armed forces.

RAF Firemen were moved to Trade Group 8 and were no longer "RAF Regiment" Firemen.  Ceremonial burning of "mudguards" was carried out at locations throughout the RAF.

Operation BURBERRY:-  RAF Firemen were deployed nationwide in response to National Fireman's strike.  As well as providing essential training for Green Goddess crews from all three services, BA Teams were sited in all major towns and cities.

Donnington Storage Depot suffered its second massive fire in the space of two years, each costing in excess of £165 million, UK's most expensive peace-time fires since the Great Fire of London in 1666.

A program of Market Testing was initiated which resulted in the contractorizarion of several Fire Stations.

Following much ground work and negotiation ASSP was formally abandoned in October 2004.

In April 2005 it was formally agreed that the new model Fire Service would be created within LAND (an Army Formation) and having been reviewed was now known as Fire Study 2005.

On 4 September 2006 the changes took effect and the Defence Fire Risk Management Organization (DFRMO) was created at Andover to direct all MOD Fire Services world wide including RAF Trade Group 8 Fire Fighters and Royal Navy Aircraft Handlers.   The chain of command is then divided geographically into Areas and Groups as follows:

Overseas Area.  HQ at Andover with Groups at:

+ control over South Atlantic and Balkans